An overview of materials available for researchers interested in exploring the history of interior design using the Kellen Design Archives.

If you are searching in a library catalog for examples of student work, use the search term Student projects.

You may also want to try the term Interior decoration -- Study and teaching.

You can also search by format if you are looking for a specific type of student work. Here are some common terms used by the Kellen Design Archives for cataloging in Bobcat: 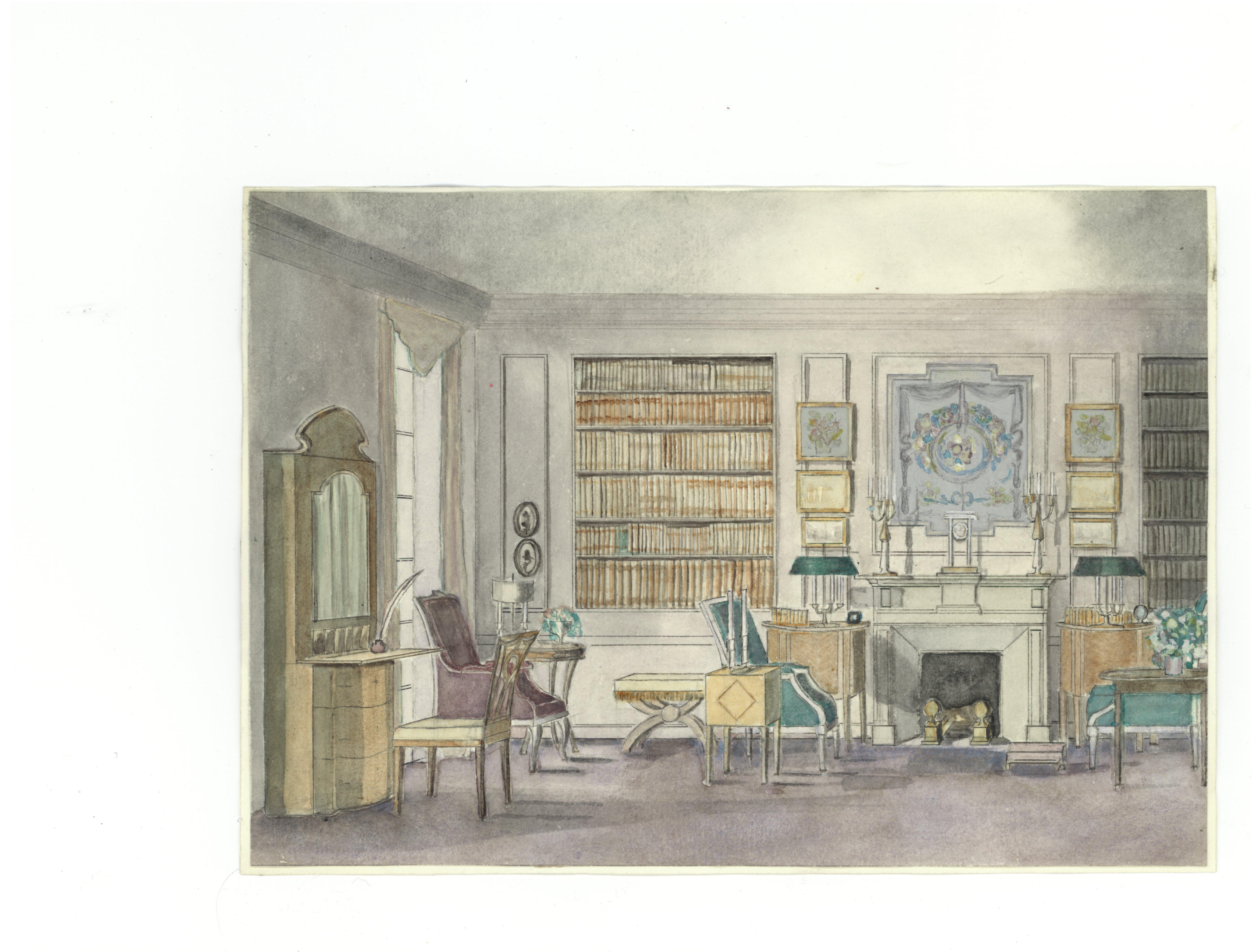 From the Lyman Martin papers 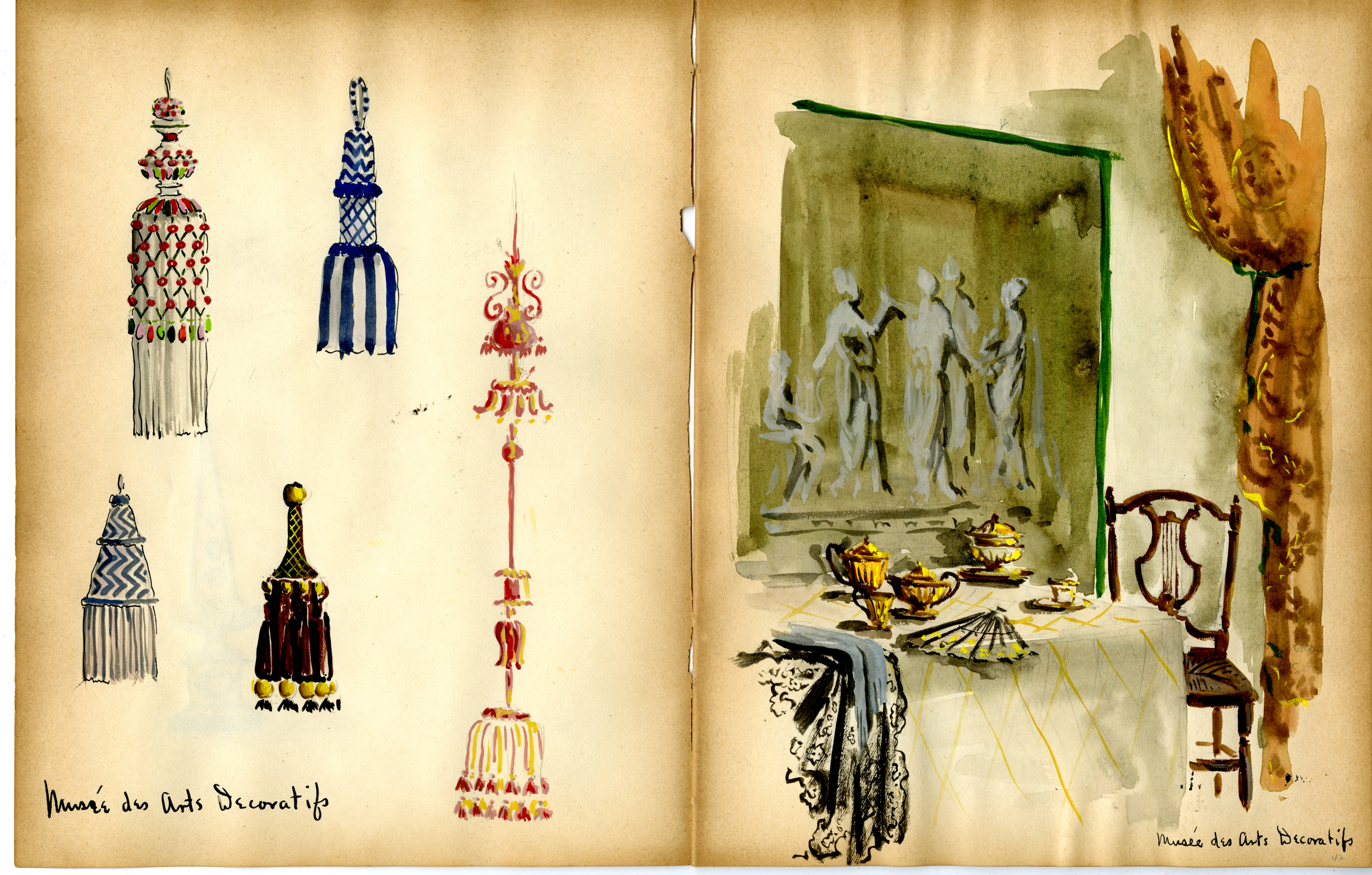 The following collections document interior design and environmental design education at Parsons from a student perspective going back to the 1910s when interior design as a professional discipline was still in its infancy. Collection titles in red indicate a collection guide is available online. Click on the title to open a guide in a new window.

Stanley Barrows (1914-1995) graduated from Parsons School of Design in 1940 and taught interior design at the school for over twenty years, becoming mentor to several generations of notable designers. The collection includes examples of student work compiled by Barrows, course outlines, class travel itineraries, reference photographs of Italian decorative styles, biographical material, and correspondence from Barrows related to his activities as a designer and teacher.

Katherine Bosch (1896-1980) attended the New York School of Fine and Applied Art (later, Parsons The New School for Design) from 1917 to 1920 and received her diploma in Interior Architecture, Decoration, and Furniture Design. The collection consists of three undated watercolor renderings depicting doorways.

The collection consists of eight notebooks kept by Mariette Cassels (1905-1993) while studying in the Paris Ateliers of the New York School of Fine and Applied Art (now, Parsons The New School for Design) in 1930-1931. Includes lecture notes, photographs, postcards, clippings and sketches of furniture and decorative moldings.

The collection documents projects completed by Casey Coates when she was a student in Parsons School of Design's Environmental Design program between 1972 and 1975. Materials consist of sketches on tracing paper, site plans, land use, climate, and systems studies for three building projects, as well as a silent, color super-8 film capturing street life in Danson's neighborhood on the upper west side of Manhattan. Danson created the film in response to an assignment to study the effect of a man-made environment upon the people who live in it.

Includes class notes and a clip book documenting decorative styles compiled by Ethel Epstein (who later used the surnames Dean and Evans) when she was a student at the New York School of Fine and Applied Arts (later, Parsons The New School for Design) in Interior Architecture and Decoration Department, around 1925-1926.

Francis Geck (1900-2005) graduated from the New York School of Fine and Applied Art (later, Parsons The New School for Design) in 1924 and taught interior design at the school's Paris Ateliers until 1927. Following a professional career in his native Detroit, Geck became a professor of Fine Arts at University of Colorado, where he taught for 39 years. The papers contain correspondence with Parsons administrators, including Frank Alvah Parsons, design renderings and student work, publications, and course-related materials.

Ziva S. Gruber (née Margalith) is an interior designer and former student at Parsons School of Design. This collection contains Gruber's student notebooks from her classes at Parsons in the early 1960s and documentation of her professional design work. Also included is material related to a 1971 Parsons student project on the redesign of the Central Park Zoo, which Gruber worked with students on as a voluntary instructor.

Daniel Lashen attended Parsons School of Design (now, Parsons The New School for Design) from 1947 to 1950. He received a certificate in Interior Design in 1950. He went on to study at Brooklyn College of the City University of New York, which awarded him a B.A. in 1954. The collection consists entirely of renderings made by Daniel Lashen while he was a student in the Interior Design Department at Parsons from 1947-1950.  The renderings from Lashen's third year include sketchbooks from his time studying in Italy and Paris.

The collection consists primarily of course assignments in the form of a collage, presentation boards, photographs, and a watercolor rendering by interior designer Catherine Minkiewicz ('66) during her studies in Parsons School of Design's Interior Design Department.

The collection consists of Jeanette Olliver's student work in the form of lecture notes, detail sketches and course materials representing her work in the Parsons Interior Architecture and Decoration Department in the early 1940s.

The collection consists of examples of Anthony Pellino's student art and design work, the bulk of which was completed in 1983, in his first year at Parsons.

Sunbeam "Sunny" Randall (1898-1993) graduated from the Parsons Interior Design Department in 1951 and worked as a professional decorator. The collection includes course materials, furniture and decorative style sketches, course notes, and a scrapbook documenting Randall's art tour of Europe as a Parsons student in 1950.

Luis Rey graduated from the Interior Design Department of Parsons School of Design in 1967. The collection consists of student projects, primarily in the form of drawings and plans, executed by Rey for his courses between 1964 and 1967.

The collection consists of art and design work executed by furniture and interior designer Allan Skriloff during his studies at Parsons School of Design's Interior Design Department between 1963 and 1966.

The collection consists of two drawings of period rooms rendered in pen and ink and watercolor.